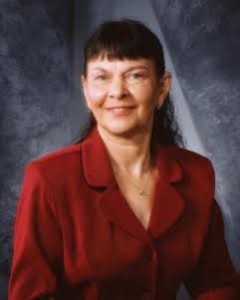 Flo Lavallie has been in private practice for over 30years in Saskatoon, along with that she had a satellite practice in Humboldt for 17 years. Prior to that, Flo had a satellite practice in Duck Lake for two years. After working in a hospital setting for 14 years, Flo obtained her Master Herbalist Diploma at the Wild Rose College in Calgary, Alberta. She is a certified Reflexologist, Sclerology, Rayid, Iridologist, Ear Candler and Kinisiologist, having studied with Dr. Spiro Lenis. Flo’s approach to healing transcends conventional boundaries as she works with: individuals, families, organizations, and communities. Her healing is not limited to medical clinics. Flo takes her work into churches, schools, private homes, and community centers as well as hospitals and clinics.

Flo is a constant reminder that true holistic healing goes beyond the individual to healing the system. In addition to her very large practice, she lobbies the government tirelessly in her efforts to build a holistic health facility for Saskatchewan: Companion Health Oasis Inc. and The Saskatoon Healing Connections Centre.

Flo is on the Board of Director’s of the Canadian Association of Herbal Practitioners, Companion Health Oasis Inc., Teaching Women Dollars and Sense, College of Medicine (Complementary Therapy), Advisory Board of the Harmony Song- The Aboriginal Healing Foundation and Meewasinota. She is also an Honorary Board Member of Tamara’s House. Flo is a past member of the Saskatchewan Women’s Conference Committee, Saskatchewan Association for the Mentally Challenged, Healthy Horizons, and Freedom of Choice Health Care, Mentor for SWITCH- Student Wellness Initiative Toward Community Health.

Flo Lavallie has been a self-advocate for people with disabilities, she lobbies governments on justice issues such as Section 745 of the Criminal Code, justice issues for people with disabilities, health related issues, and herbal medicine regulations. She is also active with the R.E.S.O.L.V.E. Steering Committee that supports solutions to violence and abuse.

Flo actively secured the land and funding to build Tamara’s House, a healing centre in Saskatoon, that is the first one of its kind in Canada. Tamara’s House provides complementary therapies and services to support the complete healing of female adult survivors of childhood sexual abuse. Flo is instrumental in addressing the legacy of Residential School Abuses by supporting many community applications for project funding from the Aboriginal Healing Foundation. The many projects Flo has supported, celebrate the traditional spirituality of aboriginal people.

Flo’s accomplishments include a recently published book called ‘Sharing Health & Wellness: Creating Your Own Road to Recovery’ and a cookbook called ‘Good Health is Cooking in the Pot’. Flo was nominated for the Flare 2003 Volunteer and was honoured as a YWCA Women of Distinction 2003 Awards, and inducted to the Saskatoon’s Women’s Hall of Fame. Flo was awarded the Commemorative Medal for the Centennial of Saskatchewan October 26, 2005, Saskatchewan Health Exellence Award Finalist 2007. She was part of the team that participated in the creation of the movie ‘Home Game’ with Ken Dryden, from which a book was written to accompany the movie. In November of 2000 she participated in the production of ‘Beyond Medicine’ that was part of a television series that aired on the ‘Women’s Television Network’. She also participated in the creation of a radio show, ‘Let’s Talk Saskatchewan’ along with Christina Chernesky.

Flo is a much sought-after speaker, a frequent presenter at schools, churches, and professional conferences. Speaking to youth about drug and alcohol abuse is a priority. Flo is married to Doug Lavallie and has four children, six grandchildren and six great grandchildren. Her hobbies range from gardening, crocheting, knitting, writing and cooking to fiddling and collecting herbs. She has a passion for picking berries and walking in the bush.

In her work and in her life, Flo Lavallie exemplifies the spirit of natural healing, social justice, and a healthy community.