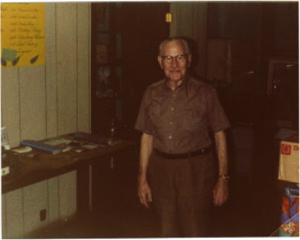 The history of Emerson College of Herbology began with its founding in 1953 as a proprietary school of herbal medicine. The founder Dr. Jack Thuna, (photo from 1979), initially opened the school at Pointe Claire, Quebec, Canada. It was one of the first schools of its kind in North America, and offered a curriculum leading to the “Master of Herbology”, M.H. degree, comprised of lessons in plant botany, formulation, natura medica, and botanic medicine, now known as phyto- therapeutics. The college also offered training in the use of the “Twelve Tissue Remedies”, and followed the same teachings as originally developed by Dr. Schussler.

The course of study was offered primarily via a correspondence format when it operated from Dr. Thuna’s Pointe Claire clinic. Here he was treating patients using only natural remedies such as herbs and chiropractic adjustments. He also established a colonic suite in his clinic, and reported to this writer that it was always busy.

Ultimately Dr. Thuna was forced to leave the Pointe Claire clinic because of a fire, so he rented the ground level of a large multi storey building at 11 St. Catherine Street East, (photo shown above), which was downtown Montreal. From this location he ran a large wholesale herbal sales operation, and established the new home of Emerson College of Herbology.

Dr. Thuna had ceased to practice chiropractic medicine, and was now able to offer a more diverse program of study in Herbology. Because the additional room afforded the opportunity to go beyond the correspondence offering, when this writer enrolled in the college in early 1977, Dr. Thuna and Professor C. C. Bell were able to provide classroom instruction. They also instituted the writing of a thesis for those of us students who wanted to explore the science to greater depths. Since the wholesale herb business was at the new location, there were vast numbers of bins containing innumerable specimens of exotic medicinal plants for examination by students. Upon graduation, students who pursued the advanced program of study were also provided a detailed transcript of grades in addition to the degree. This was done because Dr. Thuna felt that some of the courses may be accepted in transfer to other schools.

After graduation, this writer served as a consultant chemist to the college until late in 1980 when Professor Bell notified me of Dr.Thuna’s absence from the school due to failing health. Dr. Thuna was 84 years old at that time. Upon Dr. Thuna returning to his desk, he wrote to advise me that the advanced program was to be discontinued. The school would continue until the late 80’s, but only at the correspondence course level.

Pursuant to the founding of Emerson College of Herbology, there followed a veritable myriad of schools emulating Dr. Thuna’s program of study. Dr. Thuna came from a family background of natural healers. His father, Dr. Max Thuna, was an Austrian born herbalist who immigrated to the United States, and in 1888 opened a retail herbal outlet in New York which blossomed into many. His descendants remain in the herb business to this day.