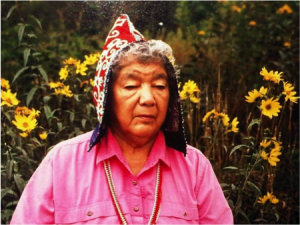 Eskasoni’s Sarah Denny loved to sing, chant, and teach native dancing. She was a strong believer in the retention of Mi’kmaw language, history, culture, stories, songs, and dance, and formed the first Eskasoni drum and dance group with her 12 children.

She held the position of cultural officer with the Mi’kmaq Association of Cultural Studies for almost three decades, and was considered an expert in the use of Mi’kmaw medicines. Over the years she received many awards, and starred in several films, videos, and radio interviews. It has been said that “she will continue to be honoured each time one of us sings, dances, shares stories and knowledge, that she gave us to pass on”.

She learned traditional medicine from her grandmother, and passed it on to her son Joel, who I know personally. Later in life she was involved in a herbal research study on plants to treat TB.