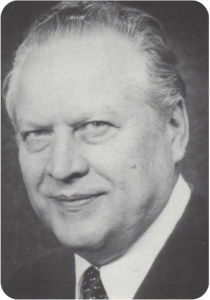 Born in Romania in 1922, Dr. Ross Skaken was a third generation Herbalist, Naturopath. He immigrated to Canada in 1927, when he was a young boy. His father, Doctor Colin Skaken ND, started a Naturopathic clinic in Calgary which he later moved Edmonton Alberta. Ross went to Naturopathic Physicians and Surgeons in Los Angeles, after serving in Second World War with the first Division of 48th Highlander. One of Ross’s sons continued on the tradition and is presently a practicing Naturopath in Calgary Alberta.

Ross Skaken was a founding member of the Alberta Naturopathic Association, Ontario Naturopathic Association and the Canadian Association of Herbal Practitioners. He was the organizing secretary of these organizations, being the driving force behind them. Dr. Ross Skaken ran the very successful and well-known Vienna Clinic in Calgary Alberta, for over 50 years starting in 1946. As a well-respected doctor he touched the lives of many people. He always felt it was important to hold a place for the Herbalists in Canada, so they would not get swallowed up in the politics of other healing professions.

A constant learner, you would always see him at every education event and conference even after being in practice for over 40 years. He always felt there were new things to learn. He was greatly blessed because of all those lives he touched, during his life, his kindness was returned ten-fold by those in whose care he spent his final years.